isiNdebele and Sesotho, Could They Be Sisters? 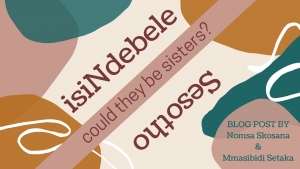 IsiNdebele and Sesotho are two of the eleven South African official languages. They are distinct and belong to different language clusters within the Niger Congo consortium of languages. IsiNdebele is one of the four Nguni languages: Siswati, isiZulu and isiXhosa. While, Sesotho forms part of the three Sotho languages: Sepedi and Setswana. IsiNdebele and Sesotho are not only from two different ethnic groups but they are also orthographically different. IsiNdebele as a Nguni language is conjunctively written, meaning that the language joins morphemes to form phrases or sentences like in the following example: ‘I love you’ is written as one word ‘ngiyakuthanda’. “These languages are basically agglutinating in nature since prefixes and suffixes are used extensively in word formation” (Taljard and Bosch 2006:429). While in Sesotho the same phrase is written as ‘ke a o rata’ which is disjunctively written. Taljard and Bosch (2006:429) share more about these aspects in their article titled, ‘A Comparison of Approaches to Word Class Tagging: Disjunctively vs. Conjunctively Written Bantu Languages’.