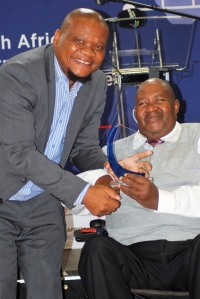 My name is Mme Mmasibidi Setaka, I am a Sesotho Researcher at the South African Centre for Digital Language Resources which is a national centre supported by the Department of Science and Innovation (DSI). SADiLaR has an enabling function, with a focus on all official languages of South Africa, supporting research and development in the domains of language technologies and language-related studies in the humanities and social sciences. The Centre supports the creation, management and distribution of digital language resources and software which are freely available for research purposes.

A Digital Humanities programme which facilitates the building of research capacity by promoting and supporting the use of digital data and innovative methodological approaches within the humanities and social sciences.

As we are now living in the era of digital technology, the 4th industrial revolution forces our languages to respond to the new ways of doing things. This means having the right knowledge and tools available to help simplify our lives, academic or not, and to make sure that our languages remain relevant in the ever changing world. Literature plays an important role in the age of digital knowledge and practice because it not only captures the ideas of the writer and passes them on as a learning and teaching tool, but we also need the same literature to train the digital tools being built for the different languages to bridge the digital gap between languages. Understanding the concept of literature in the digital era also means opening up avenues for the technologically advanced people to access reads online, on their smart phones and computers. To have an online catalogue of books where people can subscribe or check the latest reads and even buy them, either the online version or the paper version. We should have a way of giving people choice, catering for both the technologically advanced and those who are not. Some people prefer the actual book while others want to go online.

The celebration of the International Year of Indigenous Languages has brought light to the fight for our previously disadvantaged languages. Writing is a way of capturing knowledge and transferring it from generation to generation, especially in the recent quest of mother tongue teaching and learning. Nalibali.org explains in the following quote, “Being read to in your own language should not be considered a nice optional extra for children. It is really an essential and powerful part of learning language and developing literacy. When you read regularly to children in their home language(s), you give them a strong language foundation that makes all learning easier.”

Now, while preparing for this day, I came across an article online which best summarises the importance of writers and their core function in a society.

“Since the inception of this world, people have been accumulating knowledge through multiple channels and have been expressing it in their writings. These are writers. The importance of a writer for society is just like that of the brain for the body. The brain directs all the parts of the body and so does a writer with all the classes of society. A society without its own writers gets paralysed and ultimately meets its death. The culture of a society, includes its language, ideologies, lifestyle, and is its identity. A writer preserves the identity of the society to which he belongs. When he writes in his native language, he strengthens the vocabulary and grammar of it. When he writes about the religion of his society, he actually reinforces the faith of his fellows. When he writes about the ideologies and lifestyle of his society, he actually promotes them and keeps them living” www.theweeklypakistan.com

And as I read through it, the above quote captured my attention and made me think deeper about the society we live in, the struggles authors go through and how as a society we need to push for a large reading culture, a culture where everyone plays a role in support of literature. A society that reads is a society that is knowledgeable, that is able to not simply take things at face value, but that asks relevant questions. A society that reads will not be consumers of things and policies they do not understand, will not be taken for granted by other nations, and will form their own independent opinions. All of this is made possible by having writers and literatures that propel society to be better, to do more and to achieve.

We need to find ways of channeling our energy into creating spaces where not only one language is represented but all of the official languages found in the country. How about we change the whole narrative and see ourselves having book clubs for the different indigenous languages, and ask each other what is the latest trending book in Sesotho? How about we put effort in creating avenues to capture the imagination of an African child through learning, with competitions such as a spelling bee created specifically for indigenous language communities? All these point revert back to having available literature.