Using the indigenous languages at universities: Why do it and can it work? 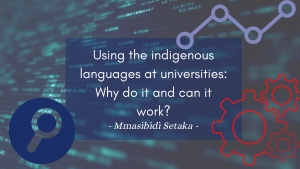